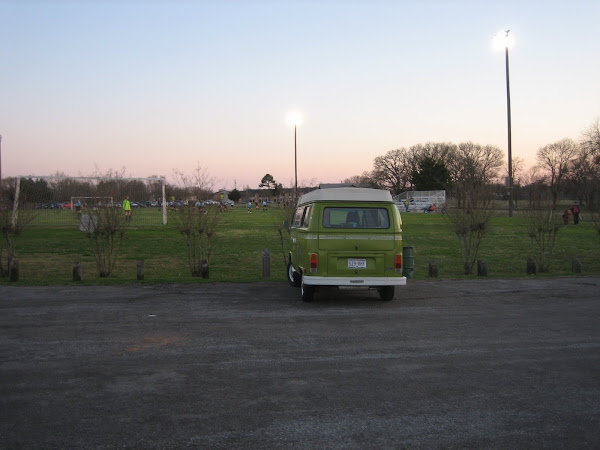 Kirk
Sherman, Texas, United States
Just a guy with VWs in his blood, who likes to write about their adventures on the internetums. Follow along, wont you? 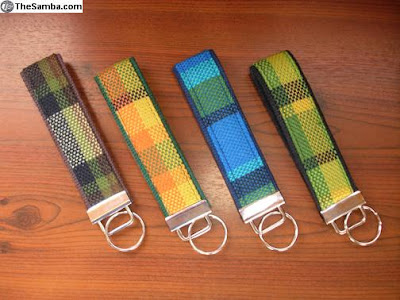 I just bought the coolest accessory. A plaid keychain! Who doesnt like plaid?!? Imma probably buy another one, becuase they are literally that cool. Where do you get yours you say? Riiiiiiiiiiiiight here:

Nothing major, however, left to my own devices, as I so often am, I decide its "Snocone for dinner night". (warning, cell pics). 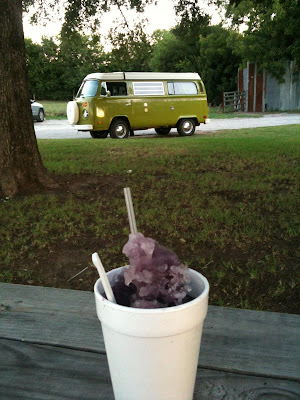 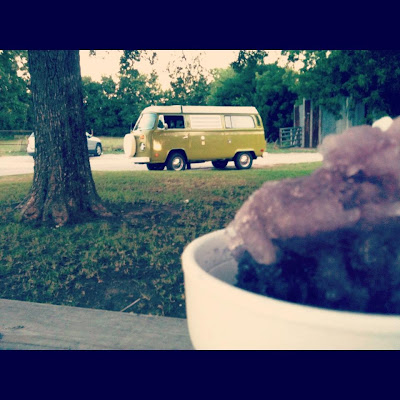 Anyway, just thought I would share. Take your VW out for a snocone. You'll both appreciate it. :)

So for some odd reason, I decided that I wasn't comfortable at home, in the AC and wanted to subject me and Doodle to a 100 degree road test and camping. Alrighty. Since my local state parks were just too close of a drive to really test our endurance, I took a look at McGee Creek State Park, outside Lane, Oklahoma. Not a bad drive, about 92 miles one way give or take.


Sounded good to me, and Doodle, lacking vocal cords or the ability to protest, agreed. Coolers were loaded, firewood was stowed, and I was on my way. 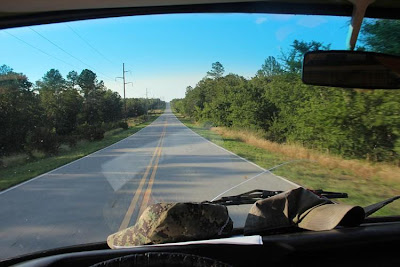 I dont care what anyone says. Seeing a back road out the window of your bus, with whatever your music tastes are blaring, is quite possibly the greatest thing ever. Ever ever.


So about the time I got 3/4th of the way through, and stopped for a general check and potty break, Doodle had found his vocal cords and decided to protest my decision to drive 100 miles in the heat. When I got out of the bus at the Caddo Superette, I was preceeded by a very large cloud of smoke. Ever time yourself to the rear of your bus with a fire extinguisher in hand? Do it. I'll wait. Now divide that time in half. Thats how fast I got back there. What I found was not a fire, but a trail of oil leading to the parking spot.

Lying down in hot oil covered gravel was not the way I intended my mini vacation to start, but by howdy, here I was. Lying there, I noticed two things simultaneously.

1- I was leaking oil fairly profusely from my passenger side valve cover. The dipstick said I wasnt more than half a quart low, but it was leaking.

Rolling out from underneath the hot ass of my travel partner Doodle, I look up and see a older man in a grease lined NAPA ball cap. He looked down at me and asked if it was my "bug van". I replied that it was. Insert uncomfortable silence, while I look at him from the hot ground, not certain if I hear banjos or not. He adjusts his overalls, and advises me that I have a "prollem". I agree. Standing, he advises me he "never cared for that German type stuff", and walked off. I blink three times in utter disbelief. I get my tool bag, and lay back down. The valve cover has managed to work up just a touch (I must have not gotten it back into place when I did the oil change/valve adjustment). Hot as it was, I get it back where it should be, top off the oil, stow my tools and go inside to wash.

Your trivia for today is to name what passes for entertainment in Caddo, Oklahoma.

Give up? Apparently its me. When I walk up to the store there are four people and the clerk standing by the window looking out at me. As I walk in their eyes follow me like those creepy dolls. Walking to the bathroom, all I hear is the clerk warn me that she "dont like messes in her bathrooms, and bathrooms are for customers only." I buy a pack of sugarless gum and head to the head. Judging by the condition of the mens room, I'd say her idea of mess and mine are completly different. I scrub up, using every single paper towel she had and leave.

Back on the road I seem to be doing fine, but just feel nervous. I check twice more, and dont see any oil on the heater box or ground. Feeling confident, I press on. 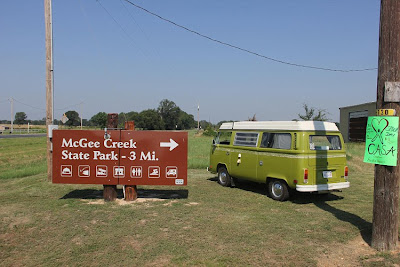 ﻿Arriving at the park, I find a primative campground right near the beach, but the trail to it is a washed out rocky mess. Hell why not. Worst case, I have some cool pics for the buses off road thread on the Samba or something. 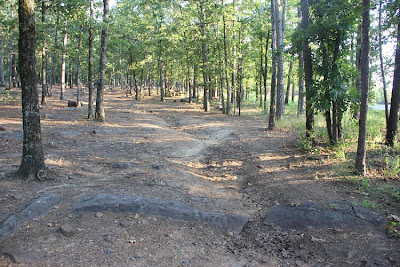 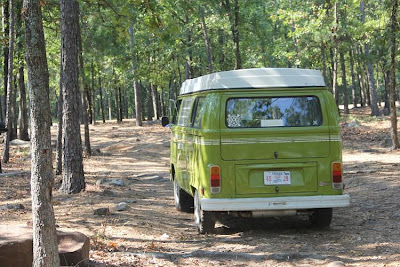 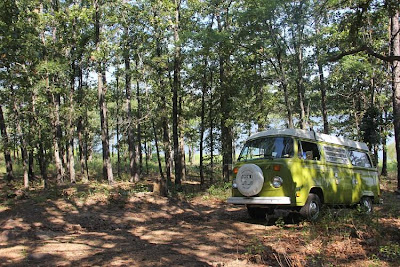 Doodle, it turns out, didnt like it. Not. One. Bit. I had to keep the RPMs up to get over several outcroppings of rocks and by the time I had navigated into the camp spot I wanted, he was bellowing smoke once again and refusing to idle. I already knew the issue, but when I shut him down and went back to the passengerside, he had vomited oil all over the sand. Sorry environmentalists, its true. So what did I do? Said to hell with it and had a beer, while watching the sun fall on my campsite. And no beer ever or since shall taste that fine.


So the next morning, after a wonderful night of camp sleeping, I got up, put the coffee on and took some pics of Doodle while planning my inspection/repair. 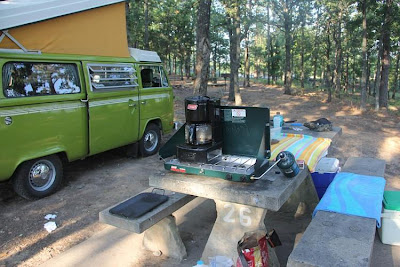 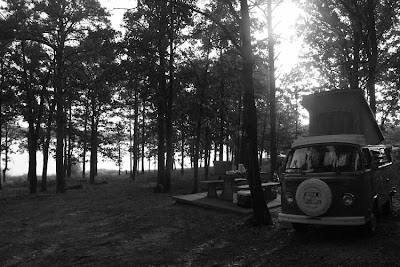 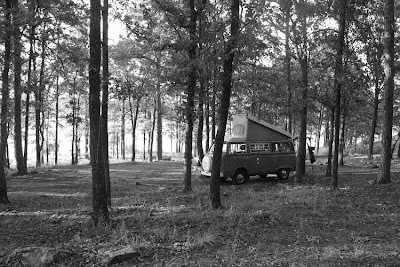 Turns out Doodle sucked the valve cover in. I traced my steps back and found no oil until right as I reached my spot. I was again about a half quart low. I dont know why this pic is in black and white. I forgot to change the settings I think. 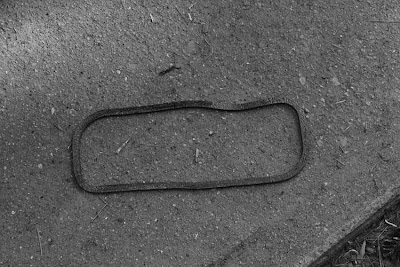 New valve cover and a thoroughly cleaned exhaust/valve cover/heater box and I'm back in business. The rest of my trip was pretty nice other than the hillbillies having a red solo cup party until 230 am just up from me. Luckily I like the sounds of Zac Brown, Jason Aldean and Luke Bryan, but I sure do like sleeping better.


All in all, I had a good time, Doodle gave me no more issues all the way home, and while nearly suffering from heat stroke and having to fire one round into the air to defend my ice chest from a very determined band of Racoons (and by determined I mean standing their ground when I exited the bus at 315am with a flip flop and a mag light. I was out numbered but determined.) I had a great time, and hope to put down more miles as the summer rolls on. Thanks for reading, Constant Reader, I do so enjoy your company. 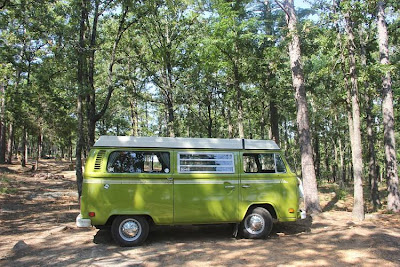 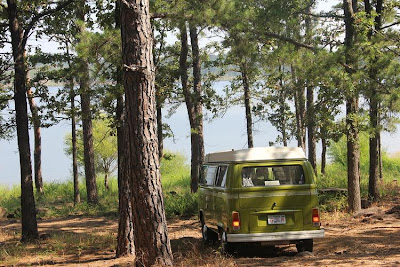 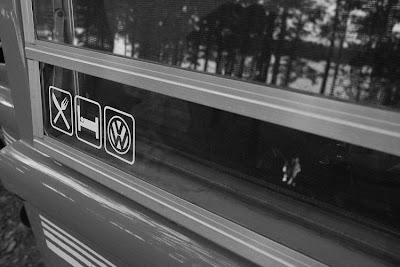 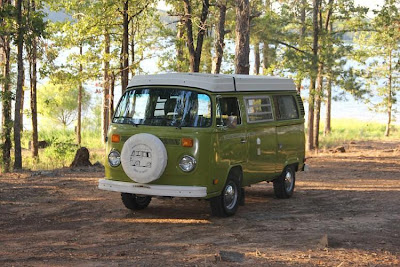 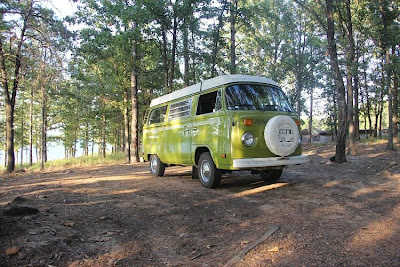 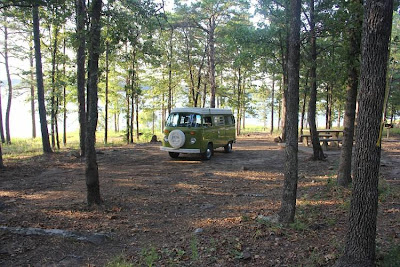 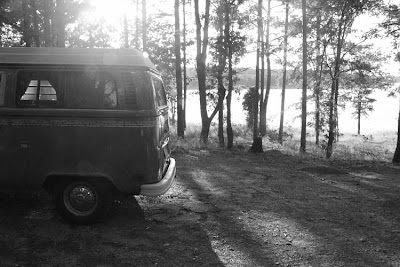 Member that one time, when I had like waxed my fire extinguisher and such? And like I was bitching because the bracket is broken/gone? No? Refresher! 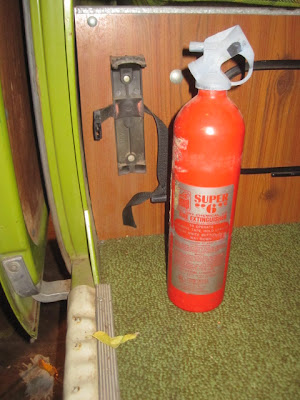 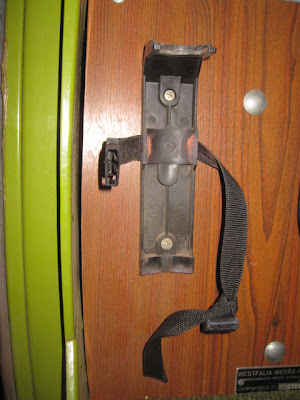 Well, after a years wait, and a wanted ad, I finally found one! (warning, crappy cell pics!) 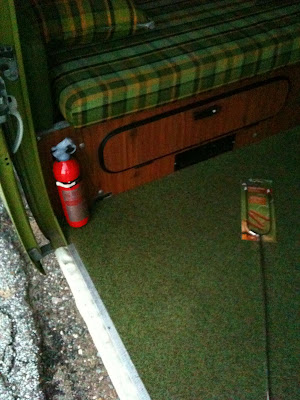 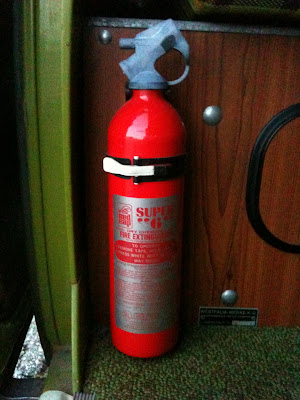 Now this might not mean anything to you at all, but its huge for me. I have a regular fire extinguisher I carry, and this one is no good, but its factory correct,  and I like it. Neener Neener. Happy Birthday to me!
Posted by Kirk at 8:56 AM No comments:

Doodle vs The Oklahoma Wild pt 2.

And story there is. So I get the invite from some friends to do some impromptu camping this weekend. Sweet! Doodle is running well lately, and my confidence grows. I've been wanting to take a long (ish) trip in him to see how he was gonna do.


I was to be disappointed.

The trip up there (only 100 miles) went pretty well really, and I got to see lots and lots of beautiful Oklahoma country side.

Only thing I really noticed was I think I have an exhaust leak now. I thought it before I left, but I went through, made sure everything was tight, and couldnt find the leak. I attributed it to my craptacular aftermarket exhaust. Like I said, the trip up was uneventful, other than 25 mph south/west winds. Kinda jiggled me around, but honestly, the tires helped. I could definately hold it in the lane easier than before. I make it to where I'm going, and have five more miles of dirt roads to tackle. (see pics) Right as I get to the gate to turn in, Doodle hicups twice. Nothing more. Idles fine. Nothing. I drive down the 3/4's of a mile to the lake, again, nothing. Thinking nothing of it, I parked.

Camping was good, fishing was good (caught a 24" across snapping turtle. They apparently love beef liver, just fyi.) food/friends/fun. Issues came when I packed up to leave. Trail back to the gate, nothing, back out on the dirt road however, shuddered again twice. By the end of the dirt road, shakes were racking him from front to back everytime I touched the accelerator. Backfires on deacceleration. AND I have to drive back into 20mph headwinds. Say it with me kids. 1-der-full.

Back out on the 2 lane, I was able to nurse Doodle up to highway speeds. Cruising was no issue at all. (As long as I didnt require him to make any changes in speed) but when I got back into city limits, I had my first of several stop lights. At the third, Doodle went on revolt, and refused to accellerate. Foot on the gas resulted in nothing. Pop-pop-fizz, oh what a relief it aint. Rolled over into the Quicky Jiffy Mart. I knew right then it had to be the AFM. (Or I thought) Checked all the vaccuum hoses. Tight. Dipstick cool to the touch. No connections off. Spent about 15 minutes going over it visually, making sure nothing was easily seen. When Colin was in my neck of the woods, we adjusted and cleaned the AFM. My thinking was the dirt from the dirt road may have gotten in and messed it up. I opened it up, and blew it out. Not much came out, but I was able to convince Doodle to get back on the highway and make slow progress home. Grudgingly.

For the record, truckers hate you, spelled with a capital H, when you are in the slow lane trying to coax your ailing bright green westfalia to climb yet another hill while under the speed limit significantly. Ask me how I know.

Once home, I logged into the samba and read threads on AFM issues. They sounded much too much like what I was dealing with to not be the same. It was then that I remembered that I have a AFM off a parted out 76 in my shop. I think I'll give that a shot. Until next time, SIGH.